The Psychology of Perception

Be careful when you open your eyes. It is likely that what you see you will take for granted. What you see is what looks normal. But what is normal? It depends on what you see. This circular relationship is what is motivating a Nevada scientist to find out how vision affects our perception about the world around us.

Meet Experimental Psychologist Michael Webster. For Webster, how we view the world has more to do with the world itself. Normalcy, in other words, is defined but what it is we are surrounded by. Webster is on a mission to understand how it is we use our eyes to gain information about our visual environment—and what our brains do with that information.

“I thought Berkeley was a dry place,” the University of Nevada, Reno professor says as an example. “(After) I moved to Nevada and go back to Berkeley, Berkeley looks like a jungle to me.” Nevada’s environment—dry, brown much of the year and devoid of the greenery of Berkeley, now appears normal to him. 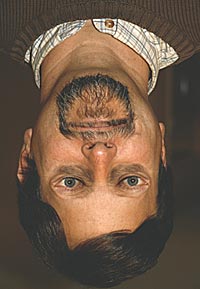 The Webster Illusion: It is difficult to recognize faces upside down, whereas recognizing faces right-side up is taken for granted. When presented upside down, the image of Michael Webster above appears mildly distorted but features are easily recognized. When the page is turned upside down, so that Webster’s face is right-side up, he looks grotesque because his eyes and mouth have been rotated. This is an example of how the process of viewing faces is coded differently in the brain than from viewing other, non-human objects. This effect is called the Thatcher Illusion, because the original photo modifications were done on an image of Margaret Thatcher. Photograph and photo manipulation by Bob Conrad. 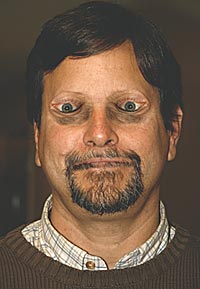 Much of Webster’s work centers on the human face and deciding how it is we interpret the myriad of expressions most of us are capable of creating. Perception of people’s faces is part of the psychological process we experience, and that experience has a critical component of adaptation.

“Even things like what people look like…whether you find them attractive and what expression you think they have—whether they are happy or angry—that’s something that you can adapt to,” Webster says.

One way Webster studies face perception to take a normal face and distort it. Test subjects stare at the distorted face for awhile. They then look at the normal version of the face. The original face will look distorted and unnatural.

A familiar and sensitive example is how different cultures perceive one another. To one culture, the members of another all look the same. This is known as the “Other-Race Effect.” Webster says it has nothing to do with attitude or prejudice. “It’s really just a visual thing. You’re very good at seeing the things you’re surrounded by all the time and your brain is not so good with seeing new things. It has to do with how your visual system works.”

Once immersed into a new environment, the human brain will adapt to its new surroundings. “There’s a theory that an attractive face is just average,” Webster explains. “If you take a hundred different people and mix their faces together, people will say that average face is more attractive than the individual faces.”

There are two sides to adaptation. One has been used as a tool to study how the brain works. If you can adapt to movement, then that means there are cells in your head that see movement. “By asking how you adapt to different movements, we can measure what the properties or the sensitivities of those cells are,” Webster says. Such research has allowed psychologists to figure how the brain is organized at different stages in vision and hearing.

The flipside is figuring why we have this adaptation. Does it help to see better? “The answer I think is that you could not be born with the right brain—born to see the world correctly,” Webster says. The brain has to be allowed to be molded to the environment that it is in. Such a process gives to people commonality and the ability to communicate—for example, to agree on definitions of things, such as symbols and colors.

This kind of adaptation has to do with making a prediction about what the world is like, and our visual system, Webster says, is usually right. But if our environment is shallow— that is, we are accustomed to one culture or race, we may assume that culture or race is the normal one. If others come along that look different, they will be viewed as outside the realm of normal possibility.

“Even how you literally you see the world depends on what you’ve been looking at,” Webster says. Easily rectified, those in diverse environments, or those who have traveled a lot, are given access to a broader range of what may be consider normal. Those experience diverse environments improve the range of possibilities, Webster says. It’s not just attitudes. It is the visual system that changes.

For examples of how our mind adapts to what we see, aspects of Webster’s research will be used in a display of visual illusions scheduled to open in early 2007 at the University’s Fleischmann Planetarium.