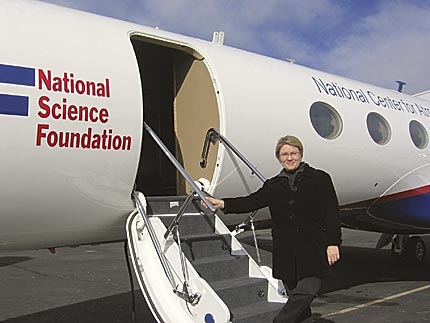 You’ve probably felt it. Flying into or out of Reno can be a gripping experience. Just moments before landing—or after taking off—a hidden force can suddenly and violently shake planes. For many passengers, turbulence seemingly takes airplanes out of control into the forces of nature—forces that can be uniquely unpleasant.

While many passengers visiting the Truckee Meadows experience its turbulent skies, what they may not know is that there is an even more devastating form of turbulence occasionally lurking above the Reno-Sparks area.

Just beneath the crest of these waves is an incredibly turbulent region called an atmospheric rotor. Invisible to the human eye, only occasional clouds can indicate the presence of a rotor. Clouds in this case are lens-shaped. If there are no clouds, but a rotor is present, it presents a potential problem for pilots—extreme turbulence.

Enter Vanda Grubisic, an atmospheric scientist at the Desert Research Institute. A native of Croatia, Grubisic received her doctorate at Yale University. Her expertise: atmospheric processes in complex terrains. The Sierras and their winds are to Grubisic an opportunity. And rotors are places to gather data.“I love wind,” Grubisic says, but “a rotor is a very nasty thing.”

She has first-hand experience.

“I was on board an aircraft and we flew through a rotor. It was a smooth take off with little wind,” she says. But characteristic of the phenomenon, “there was no indication that a rotor was present. We took off. Then suddenly, when we were at mid-mountain height, the aircraft started going up and down. I could feel the struggle the pilot had keeping it on course.”

Grubisic says her experienced pilot weathered the invisible turbulence and got the plane out of the rotor after a minute.

“Most people on board had no idea what happened to us,” she continues. “There was a very unpleasant silence in the cabin, except for my child who was screaming at the top of her lungs. I’m sure everyone was praying.”

The danger in such a situation is minimal for experienced, commercial pilots. For less experienced pilots, or smaller aircrafts, rotors can be deadly.

That doesn’t stop Grubisic. Using a small research airplane near Owens Valley, on the California side of the Sierras, Grubisic flies directly into rotors in order to obtain data on the pockets of turbulence.

“The whole Sierra range is crying for research into atmospheric processes,” she says. The dynamics of these rotors are basically unknown but these waves have been contributors to airplane accidents. Grubisic and a research team from the United States and Europe are trying to understand how and why these rotors form, as well as how strong they can get.

It is potentially life-saving research and is recognized by the National Science Foundation. Called T-REX—Terrain-induced Rotor Experiment—the research is worth more than $9 million in grants. If scientists can figure how to predict the potentially devastating form of turbulence, they may be able to create a warning system for pilots. Detecting rotors means that airports can direct pilots to fly different routes or delay take-offs. Passengers can then have a more comfortable and safer plane ride.

Grubisic says her research will take at least a decade before data can be applied toward a potential practical application, like a rotor detection system. In the meantime she is clear to say that commercial pilots are aware of rotors and are well trained to safely fly in turbulent skies.

“Aircraft flying is one of the safest means of transportation,” she says. Statistically speaking, it is far more risky to drive during rush hour.

“There is an inherent assumption people make that cars are safe because they are moving on the earth’s surface,” Grubisic says. “Once people are airborne, it is not our natural state.”

Also once in the air, you have no idea that something may be waiting for you, such as clear-air turbulence—or a nasty rotor. That’s what makes flying scary.