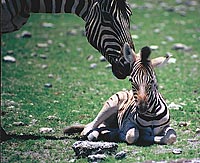 Zebra mare and foal. Photo by Elissa Cameron, a mammal ecologist in the College of Agriculture, Biotechnology and Natural Resources. Elissa Cameron

NOTE: This article also led to a feature in Discover Magazine.

One of the most debated hypotheses in evolutionary biology received new support today, thanks to a study by a scientist at the University of Nevada, Reno. Elissa Cameron, a mammal ecologist in the Department of Natural Resources and Environmental Science, has helped to disprove critics of a scientific theory developed in 1973.

At that time, ecologist Bob Trivers and mathematician Dan Willard said that large healthy mammals produce more male offspring when living in good conditions, such as areas where there is an ample food supply. Conversely, female mammals living in less desirable conditions would tend to have female offspring.

“Male zebras can father more than a hundred offspring in a lifetime, whereas female zebras are constrained to minimal reproductive rates—about one a year,” Cameron said. “Sons, therefore, offer higher breeding rates to zebra parents, while female offspring are a lower-risk investment.

“Therefore, if the animal’s living conditions aren’t suitable, giving birth to a female would better ensure the animal’s genetic success in the long term. Daughters of less healthy mothers would out-reproduce sons in poorer conditions because males that are unsuccessful in having mates have few offspring while most females breed throughout their lifetime.”

The problem with this idea is that, until now, only about 30-percent of studies have supported the hypothesis, which has been debated because there have been so many studies that have attempted to test the idea. The results have been contradictory—some find support for the hypothesis, some do not, Cameron said.

But in a journal article published today in the “Proceedings of The Royal Society of London: B,” a journal of the independent scientific academy in the United Kingdom, Cameron asserts that there’s a good reason to support the hypothesis.

It could all boil down to the amount of glucose, or blood sugar, in a female mammal’s body around the time of conception, Cameron said.

She conducted an analysis of 1,000 studies that examined the Trivers-Willard hypothesis and sex ratios in mammals. Her study found that female mammals that were in better body condition during the early stages of conception were more likely have male offspring. Body fat and diet can affect levels of glucose circulating in a mammal’s body, and Cameron suggests that the levels of glucose around the time of conception could be influencing the sex of the animal’s offspring.

“A high-fat diet can result in higher levels of glucose, thereby supporting the hypothesis that glucose may be contributing to the sex of the mammal’s offspring,” Cameron said.

This finding is key to the Trivers-Willard debate, and if supported in future studies, Cameron’s theory could have dramatic influence on wildlife control and animal production.

“If you can get dairy cows to have more female calves, it would have huge implications for the dairy industry,” she said.

Cameron said she would like to test her hypothesis by reducing the amount of glucose in selected populations of wild mammals. An injected steroid can block glucose circulation, and potentially increase the number of female offspring, while in the long term the same result may be accomplished through diet.

Such a study would be able to show whether mammal populations in different regions could be increased or decreased, based on the needs of those areas, she said. In eastern Nevada, for example, declining populations of mule deer could be better researched by taking into account Cameron’s contribution to the decades-old scientific controversy.

Though her analysis has rekindled debate of the Trivers-Willard hypothesis, and its implications for mammal ecology, Cameron said that she hopes her broader accomplishment would be to generate further inquiry.

“Right or wrong, the journal article will spark research to confirm or deny my theory about the role of glucose in determining gender in reproduction,” she said. “The idea is that it will hopefully encourage more research.”