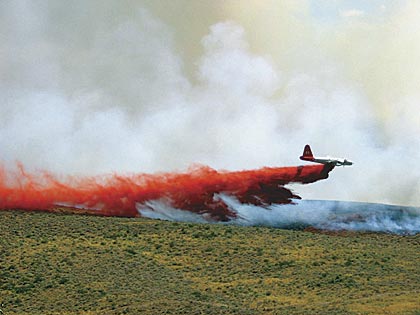 Originally appeared in the October 2006 issue of RLIFE Magazine.

It looks grim. More than 1.3 million acres of Nevada’s lands burned this year. Ranchers and farmers have lost critical grazing ground, and some of them may be put out of business permanently.

That’s not all. Before flames even hit wildlife habitat, entire herds of mule deer and antelope were asphyxiated by smoke. The Nevada Department of Wildfire issued an emergency hunt for big game animals because the loss of winter habitat. More than 100 sage grouse leks—breeding sites—also burned. The bird is dependent upon sagebrush and is a sensitive species in the Great Basin. This year’s fire season puts its habitat even more in question.

What experts are calling one of the state’s most devastating wildfire seasons have impacted eastern Nevada hardest, Elko County in particular. The impact will be felt for years to come. In 1999, which saw similar levels of fire throughout the state, economic impacts from fire were counted to be at least $13 million in just four counties. The cost included the rebuilding of fences and structures, loss of livestock forage and conservation efforts. This year is looking to be similar.

Nevada, not surprisingly, is a state becoming too familiar with summertime outbreaks of fire and a regular haze of smoke from burning hillsides. “Experts predicted 10 years ago these kinds of fires in Nevada,” says Ed Smith, of the University of Nevada Cooperative Extension. “Six of the country’s 10 greatest fire seasons—total acres burned—have occurred in the last ten years. We’ve been keeping track since 1960, and our trend is to put more and more homes into areas more and more likely to burn.”

It turns out that water, Nevada’s high-demand natural resource, is a mixed blessing because of its role in fires. Many of this year’s fires are attributable to the wet, 2005-2006 winter. Increased moisture led to high fuel loads in the form of grass growth.

A major culprit to the increased fire frequency is the nagging cheatgrass, which is becoming more common than sagebrush throughout much of the state. The hills surrounding the Truckee Meadows are yellow with the weed much of the year. Its short time spent being green in the spring means it spends the rest of the year dormant and dangerously dry—about one pound of cheatgrass is the flammable equivalent to one gallon of gas. Its sharp, pointed seeds contribute to its ability to quickly spread onto lands after fires. Entire landscapes can easily become inundated with the non-native invader.

Smith also says pinyon-juniper woodlands, particularly in eastern Nevada, have another problem—they’re living too long. “Pinyon-juniper used to burn on average every 25 to 30 years,” he says. “Now many areas haven’t burned for more than a 100 years. They’re not supposed to get this mature.” With age comes density and dominance. The trees are encroaching into lower landscapes from hillsides.

When the trees burn, they burn so hot that any nearby native vegetation recovers only with great difficulty, Smith adds. Charred pinyon-juniper woodlands invite weeds, like cheatgrass, to take over. The cycle then waits for the next strike of lightning—a common cause of Nevada’s fires—or next year’s dry summer when conditions invite more devastation.

Smith says that we can learn to live with fire, however, and he has been at the forefront of community education in northern Nevada to educate citizens on how to best cope with these natural disasters. “The first thing we tell homeowners is that they are the most important person in protecting their homes from wildfire, not a fireman,” he explains. “Houses that survive wildfire often do so because the homeowner took the necessary steps before the fire occurred.”

Smith says that the best indicator for whether a home will burn is a wood-shake roof, which increases flammability. Second is the proximity of flammable vegetation, like cheatgrass, growing within 30 feet of a home. Another reason homes burn is because of dangerously deceptive embers that “rain down from intense fires and are carried by high winds,” Smith says. These embers can easily enter into attic and foundation vents. “Houses can be pelted with thousands of embers that may ignite a home even days after a fire has passed.”

Smith recommends homeowners cover their foundation and attic vents with 1/8-inch wire mesh. Easy access to homes for emergency responders is also critical. Well-marked street names and reflective address numbers increase the likelihood that firefighters can locate homes under the threat of an impending fire.

That’s not to say there are any guarantees. Fire will continue to greet Nevada each year, often with dire and expensive consequences. Those who live on the urban-wild land interface are most at risk. Smith cautions that one reality facing Nevada in terms fire danger belongs to human memory. “There’s a saying going around,” he says. “The half-life of a natural disaster in Nevada is six months. Many people quickly forget about it.”

Before that happens, help with reducing the wildfire threat is easily attainable. For information on what you can do before, during and after wildfires, call your local Cooperative Extension office or firefighting agency, or visit www.livingwithfire.com.