The Secret Science of Orchids 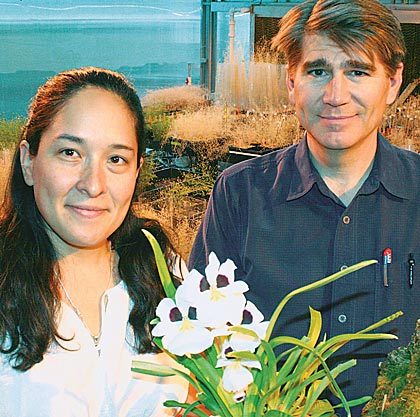 Biotechnology, though often misunderstood, is a well-established field of science. Simply, biotechnology involves researching or using organisms at molecular levels.

“Plant breeders have been transferring thousands of genes from one plant to another for thousands of years,” says John Cushman, a University of Nevada, Reno biochemist, when speaking about plant genetics. “But this technology makes the process more controlled and precise by manipulating one or a few genes at a time.”

Biotechnology is, in fact, ultimately more accurate than past practices of genetic manipulation using traditional plant breeding methods. It has been used to enhance or alter the nutritional value of foods and to increase crop yields. It is the latter that motivates a team of scientists at the University, who are studying plants at the molecular genetic level to figure out exactly how and why plants grow and evolve as they do.

Cushman explains: Up to 35 percent of the earth’s lands are considered arid or semi-arid. In terms of agricultural production, knowing how plants respond to environmental stresses, such as cold, heat, drought and salinity, “are important questions evolutionary biologists are interested in,” he says.

Knowing how plants, particularly those in arid climates, relate to their environment is, therefore, a critical component in the quest toward knowing just what certain genes do to keep plants alive and responding to environmental stressors such as hot and cold temperature swings, as seen in Nevada.

In arid and semi-arid climates, or in climates with seasonally wet and dry cycles, certain plant species have what’s known as Crassulacean Acid Metabolism, or CAM. “CAM is an important water-conserving mode of photosynthesis present in about seven percent of vascular plant species,” Cushman says. Vascular plants are those that have leaves, stems and roots. These plants are dominant in most of North America’s plant communities.

Most plants take in carbon dioxide during the day and lose water in the process. In CAM plants, on the other hand, stomata—tiny openings or pores found on surface of plant leaves that are used for gas exchanges—are closed most of the day. Stomata in CAM plants open at night to take in carbon dioxide, making these plants far less likely to lose water. This process makes the plants far more adaptable to arid areas.

“The CAM biochemical pathway is controlled by a circadian clock—with some components functioning in a phase opposite to that found in other plants,” Cushman says.

Many tropical plants have CAM. Pineapple and vanilla, as well as horticultural ornamentals such as cacti and bromeliads, all have CAM. But it is the tropic-based orchid that may hold the secret to CAM. In orchids, CAM is highly represented—about 50 percent of orchid varieties have CAM, making it an ideal model for understanding what is ultimately necessary for making a CAM plant.

The problem: relatively little is known about CAM’s evolutionary origins. So Cushman’s team of students and other professors is conducting research on part of a larger project in which about 1,600 species will be analyzed from living and preserved specimens. Their goal is to gain a greater understanding of the evolutionary origins of the CAM photosynthetic pathway in orchids.

“With global warming, we’re going to see increased aridity in major agricultural areas,” Cushman says. Knowing the evolutionary origins of CAM will help researchers be able to apply their knowledge to shifting patterns of species survival in a changing landscape of water distribution within tropical rainforests.

“The health of tropical rainforests in the face of global warming should be a major concern to everyone due to the rich species diversity found in these ecosystems,” Cushman says.

The long-term goal of the research is to be able to transfer the water-use efficiency aspects of CAM to other crop species. “Although this aspect of the project is years away, understanding the fundamental aspects of plant biochemistry and molecular genetics gives us the basic tools scientists need to one day develop alternative crop systems that require less water or that can utilize arid and semi-arid lands for agricultural production,” Cushman says. “This is one important strategy for being able to provide for humanity’s food, fiber and biofuel needs well into the 21st century.”